CORONADO, CALIF. (NNS) — Female Sailors accomplished many firsts in the Navy, such as Adm. Michelle Howard’s selection as the first female four-star admiral and Vice Adm. Nora Tyson being the first woman to lead a Navy operational fleet. Shattering glass ceilings in the Navy is not reserved for only the highest ranking Sailors, however.

During a ceremony on Naval Base Coronado, April 27, Erica Gibson, a 17-year enlisted Sailor, became the first female aviation Navy Search and Rescue (SAR) swimmer to promote to the rank of senior chief petty officer. Assigned to Commander Helicopter Maritime Strike Wing Pacific (CHSMWP) Squadron Augment Unit (SAU), Gibson is the only chief in the Reserve unit and serves as the Senior Enlisted Leader.

“This was a major accomplishment for us,” said Gibson. “Most female SAR swimmers get out of the Navy after their first enlistment or transition to something bigger, such as a commissioning program. For a female to stay with it, is a pretty significant accomplishment.”

“She is a tremendous asset to the unit and the Navy Reserves,” said Pastorin. “She embodies the label as the ‘total package’ on a daily basis. One minute she’s mentoring Sailors on the ways of the Reserve pay structure and career path, and the next minute she’s providing critical flight support as a Naval Aircrewman and rescue swimmer, or working with our stakeholders at the Maritime Support Wing or Navy Operational Support Center North Island and shaping our ability to provide operational support.”

Gibson, who has three children and whose husband is also in the military, said her journey has been extremely difficult serving in a male dominated rate.

“Three kids and full-time jobs really can take a toll on me and my family,” said Gibson. “Through all of the challenges, I remain humble and put the uniform on with pride because I know there are Sailors who rely on me. At the end of the day, it’s our job and responsibility to take care of our junior Sailors.

It is also our responsibility to set the example by maintaining readiness and continuing to support the mission.

“I can’t think of words to express what my family, my Navy family and my Sailors have done for me,” said Gibson. “Having an open heart and mind, dedication and mission focus are keys to success. All of those who helped me get here today displayed similar traits and morals. If we didn’t all have that common ground, we couldn’t have grown together.”

Gibson said the highpoint for her ceremony was having the first aviation female SAR swimmer promoted to chief petty officer, now retired, Leticia Anderson in attendance.

“When I saw those senior chief anchors placed on her collar, my heart was just completely filled with joy,” said Anderson. “When I retired, she was the only female aviation search and rescue swimmer in the entire Navy serving in the chief petty officer ranks. Her hard work and dedication paid off. Not only did she break it, but she completely shattered that glass ceiling”.

Although newly frocked, Gibson has her eyes on adding another star to her newly earned collar device.

“It would be pretty amazing to promote to Master Chief,” said Gibson. “However, my immediate focus is taking care of my rating. We don’t have many AWRs in the Navy Reserves and not enough AW master chiefs to help manage the entire community. We have 755 billets and only one E-9 billet on the East Coast. I’m going to continue to reach out and do my part to take care of the entire Selected Reserve (SELRES) AW community”. 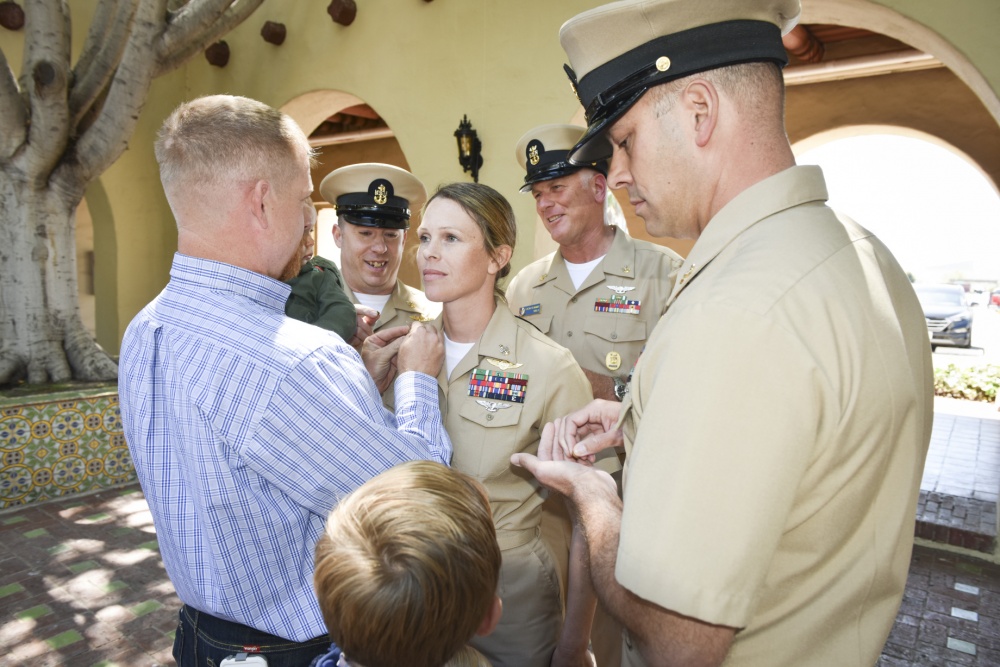